Winnipeg Ready to Celebrate During Round Two of Jets Playoffs Hockey 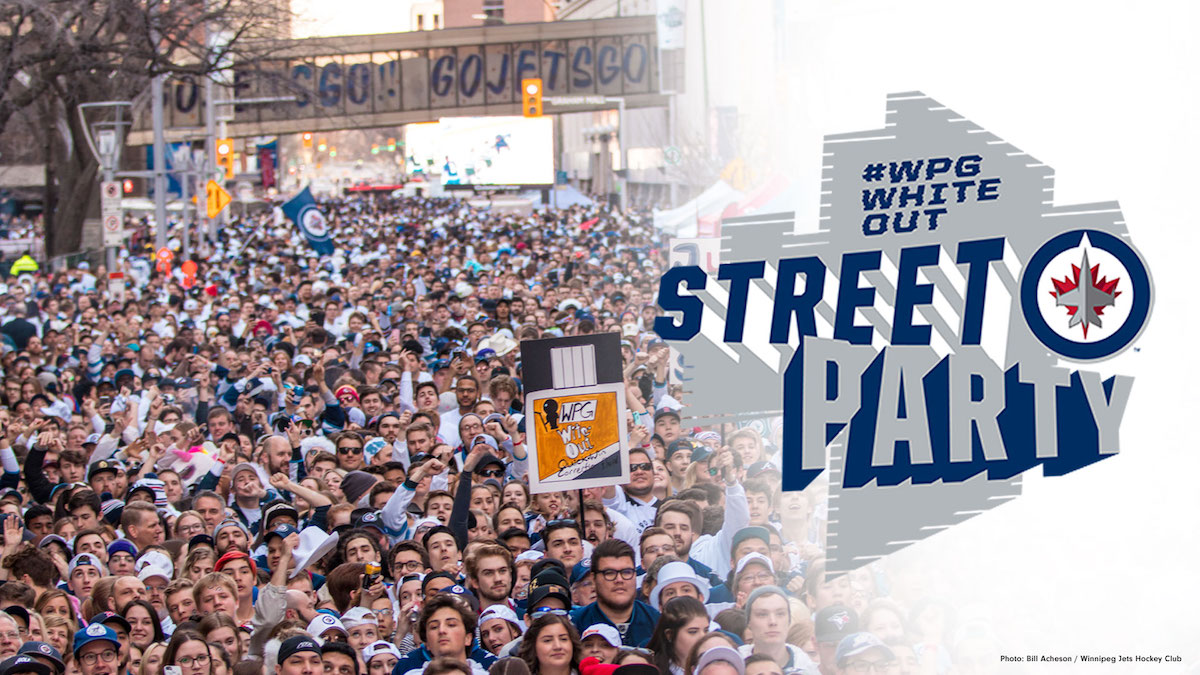 April 26, 2018 - As the Winnipeg Jets prepare for the second round of the playoffs, Winnipeg is preparing to cheer on their team in crowds tens of thousands strong.

The Winnipeg Whiteout Street Parties, which will continue during all home games of the second round of the NHL playoffs, will expand in size again. The party will expand eastward on Graham Avenue, up to Garry Street as well as Smith Street between Graham Avenue and Portage Avenue.

This expansion will include a massive new screen measuring 36 feet lengthwise, and 22 feet tall. Other amenities and vendors will also increase to accommodate the larger venue capacity.

The start time for the Winnipeg Whiteout Street Parties are as follows:

“In round one we saw the city come out in an unprecedented wave of support for their city,” said Dayna Spiring, President and CEO of Economic Development Winnipeg. “The Winnipeg Whiteout Street Party has put our city on the map. People from across North America were amazed by the energy of our hockey fans, as well as our fierce Winnipeg pride.”

For away games during the series, True North Sports and Entertainment announced yesterday that Bell MTS Place would be opened up for fans to watch in the arena. Tickets went on sale at 1pm today, and sales for the first two games of the series next week are selling quickly. Proceeds from these ticket sales will benefit the True North Youth Foundation. For more information, please visit tnyf.ca.

“This is a very exciting time for our city and True North,” said Kevin Donnelly, Senior Vice- President of Venues and Entertainment, True North Sports + Entertainment. “We’ve received positive feedback about the street parties from teams across North America and we’re committed to working with our partners to make each street party a safe and exciting place for hockey fans to share the Winnipeg Jets’ playoffs experience together.”

“This is an extremely exciting time for our city,” said Mayor Brian Bowman. “I want to recognize the tremendous amount of time invested by city staff across many departments to ensure we delivered an event that was safe and accessible. All of their work has enabled us to showcase to the world a city and team that are second to none!”

“We want to make sure that people coming to the Whiteout Street Party feel safe and welcome,” said Spiring. “The Winnipeg Police Service has been a tremendous partner in the success of these events. I want to thank them, as well as all other city departments and stakeholders, for all their work in helping make these events the massive success they have been.”

“This positive media coverage has increased attention to our city in a way that has exceeded our expectations,” said Spiring. “People are taking notice that Winnipeg is an exciting, modern city filled with passionate people. We’re going to be capitalizing on this positive coverage for years to come when it comes to attracting new visitors, residents and companies to consider Winnipeg as their next destination of choice.”

The cost of hosting the Winnipeg Whiteout Street Parties during round 1 of the NHL playoffs have been finalized. The round 1 total cost of all three parties was $394,000. Of this cost, True North Sports + Entertainment paid a total of $226,000, which includes a $30,000 contribution to the City of Winnipeg to assist with policing and transit costs. Economic Development Winnipeg paid $28,000, while the remaining $140,000 costs to the City of Winnipeg are being managed within existing Council-approved budgets.

The Mayor’s Office has committed a total of $120,000 from the Civic Initiatives Fund to Economic Development Winnipeg to support their leadership role in organizing the initial three street parties and for the duration of the Winnipeg Jets’ post-season.

An estimated 35,000 people attended the Winnipeg Whiteout Street Parties during the first round of the NHL playoffs. For the second round, games 1 and 2 will be played in Nashville on April 27 and 29, while games 3 and 4 will be played in Winnipeg on May 1 and 3. Dates for additional games in the series will be announced if necessary.