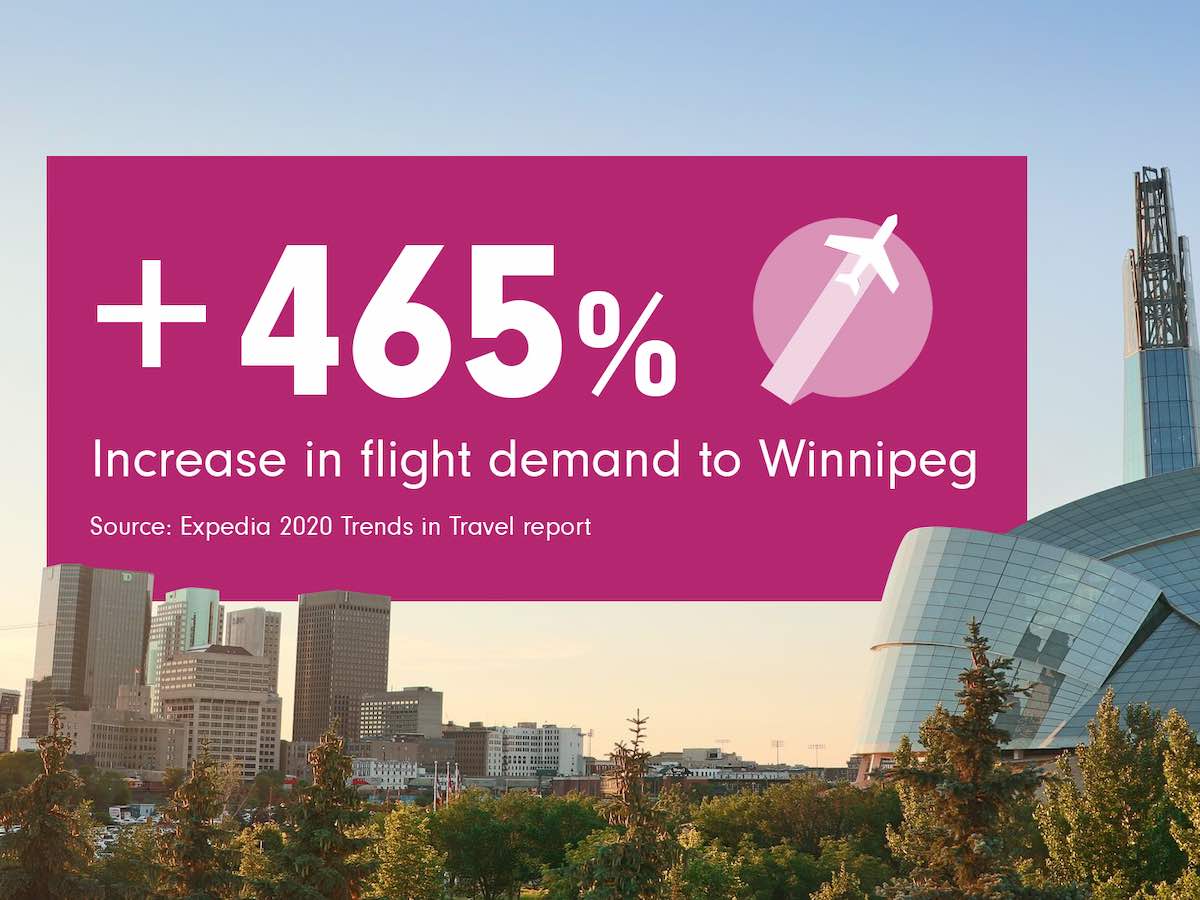 According to Expedia, Winnipeg saw an increase in flight demand of 465% in 2019

Winnipeg hits list of top spots to visit in 2020

We know Winnipeg is amazing and word is spreading around the world. Travellers booked so many flights to the ‘Peg last year, we made the list of must-see top tourist spots for 2020 on Expedia’s travel trend tracker.

“The fastest-growing destination in Canada was Winnipeg, which saw an increase in flight demand of 465% compared to the same time period in 2018,” says Christie Hudson, Senior P.R. Manager for Expedia North America.

“Winnipeg is a great destination for anyone who’s looking to avoid crowded, expensive tourist hotspots, and it’s easily accessible from a lot of places in the states – just a 2 hour or so flight from Chicago, for instance,” Hudson added.

When they get here, there is no question they’ll be greeted by a diverse and exciting city. Our people, creative food experiences and unique attractions are options visitors can enjoy whether they come in January or July.

“Winnipeggers shouldn’t be surprised we’re at the top of this list because people around the world are seeing what we have to offer. While we sometimes take it for granted, Winnipeg has creative people, spectacular museums, arts and exhibits that capture the imagination or inspire, unique meeting spaces, sprawling urban parks or natural attractions right within city limits that make Winnipeg a must-see destination,” says Economic Development Winnipeg CEO & President, Dayna Spiring.

EDW and Tourism Winnipeg ran three separate ad campaigns with Expedia last year between January and December 2019 to help raise the profile of the city with potential travellers. The campaigns led to more than 15,000 plane tickets and nearly 42,000 hotel stays getting booked and $7 million in revenue. While the campaign may have contributed to the rise in interest, Expedia’s Christie Hudson says something else might be at play, as well.

“Travellers are clearly motivated to look beyond the most well-known tourist destinations and are exploring up and coming cities. Whether that’s because air travel is becoming increasingly accessible and affordable due to new routes and basic fares, or people are looking to avoid crowds in some heavily-touristed places, I think it’s exciting to be able to get the word out and inspire people with these destinations.”

Here’s a look at a few more stories about why Winnipeg stands out: