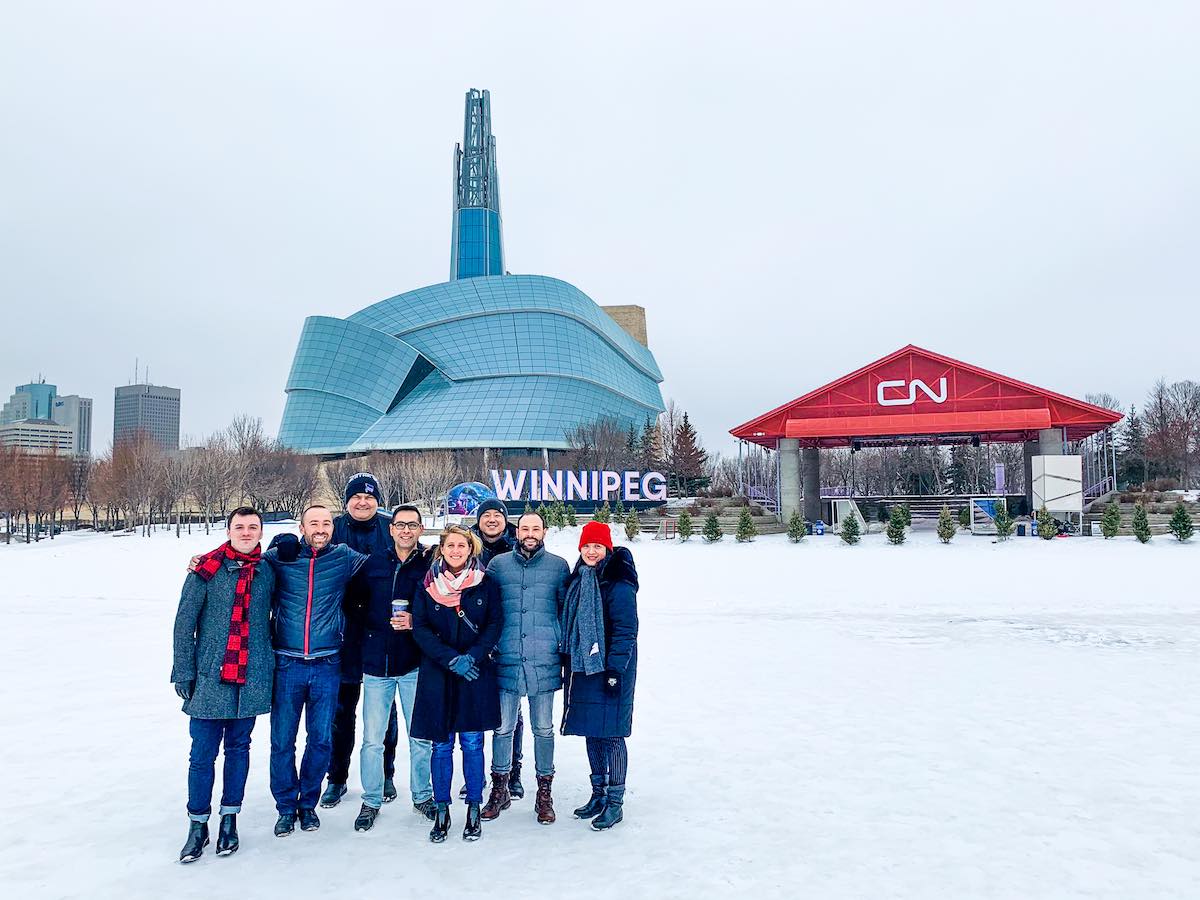 For several years in a row, Site Selection magazine has listed Winnipeg in its Top 20 best locations in Canada list. In January 2020, it also noted that Winnipeg’s growing tech sector was appealing to international talent. They aren’t the only ones.

“First and foremost, what really struck me was the team effort to attract investment, this is something you do not necessarily find in that degree in all parts of Canada,” says Detlef Engler, Senior Investment Counsellor at the Canadian Embassy in Germany.

Engler was part of a group of 11 Global Affairs Canada (GAC) officers from seven different countries who visited Winnipeg in March 2020 just before the COVID-19 pandemic hit and restricted travel.

Investment officers play an important role for Canada since they embed themselves into the business community of the country to which they are posted. They learn from the inside of these markets which companies are growing, what their priorities may be, how they make decisions and then influence them to consider Canada and cities like Winnipeg for their investment

According to Engler, the combined efforts between the provincial government, regional economic development agencies including Economic Development Winnipeg (EDW) and local businesses are very valuable.

“For investors, it is important not only to be close to markets but it is equally important that they actually do have sales services out of one hand so that Team Manitoba approach will be striking for companies. Efficiency is always work divided by time so you need a team that can assist you there because distances are big and time is of course what determines everything. Being close to markets is important and companies have to keep true deadlines,” adds Engler.

Team Manitoba is a provincial strategy put in motion in 2019 to develop a lockstep approach to economic development. The province works closely with Economic Development Winnipeg and its partners to leverage resources and opportunities for new investment across the province.

Aice Xiong, an investment officer from Chongqing in the southwest part of China, says she knew little about our city in the geographic centre of the North American continent.

“I did not know much about Winnipeg – maybe the Winnipeg Ballet and Richardson (International). This is why I asked to come to Winnipeg because I wanted to know more,” says Xiong.

EDW’s development team, YES! Winnipeg, understands that some foreign investors may know little about our city. That’s why it was a priority to create a Foreign Direct Investment (FDI) team in 2019.

“We know Winnipeg needs to have higher visibility on the global stage and that foreign businesses will invest here once they understand the opportunities,” says Ryan Kuffner, YES! Winnipeg’s Vice President of Sales & Business Development.

“We want to plant the seed about what Winnipeg has to offer, what makes us a leader in the aerospace, creative, ICT, agricultural and manufacturing industries and why we’re a good fit for businesses that want to expand to North America,” adds Alberto Velasco-Acosta, YES! Winnipeg’s Director of Foreign Direct Investment.

“I think there is definitely an opportunity. Winnipeg has several industry clusters that could be a fit with the Bay area market, in particular, I’m thinking both on the ICT sector and also advanced manufacturing and agriculture,” says Kegan Johnson, who works for the Consulate General of Canada in San Francisco.

“What struck me was the significant diversity of industry that I did not expect at that level. I mean, I knew about Boeing and I knew about the aerospace cluster but particularly advanced manufacturing in that depth was new to me. What I also found interesting was the development of downtown with SkipTheDishes, with the new facilities of Ubisoft, who are building a startup scene downtown which also helps the city and that is again something I did not expect,” adds Germany’s GAC officer, Detlef Engler.

“For my area, I saw a logistics centre opportunity, including the supply chain and also the protein. It does not matter whether it is plant or animal, both are essential for China especially the food safety being a priority for everybody,” says China’s GAC officer, Aice Xiong.

“Any company that is looking to grow in the ICT sector or manufacturing could see Winnipeg as an FDI destination. The opportunity for growth here is found in talent, and the way in which companies can go about finding talent to grow their business,” adds Mexico’s GAC officer Ruben Lugo.

“In addition to everything Winnipeg has to offer, they have a very impressive style of working and doing business. The people are very proud of what they have and any company would be happy to grow and thrive in this environment.”

All the officers also got a chance to see the quality of life Winnipeg offers through our diverse community, experiencing some of our vibrant arts and culture scene, exciting restaurants and world-class attractions.

EDW’s FDI team is hoping the experiences of investment officers from around the globe will increase the number of quality investment leads coming to Winnipeg.

The team is already gaining traction on that front, with leads coming in from non-traditional investment markets, including Mexico and invitations to key business events.

Detlef Engler, the Senior Investment Counsellor at the Canadian Embassy in Germany has also agreed to be a mentor and key partner to help the team develop and deliver an FDI training program for Winnipeg.