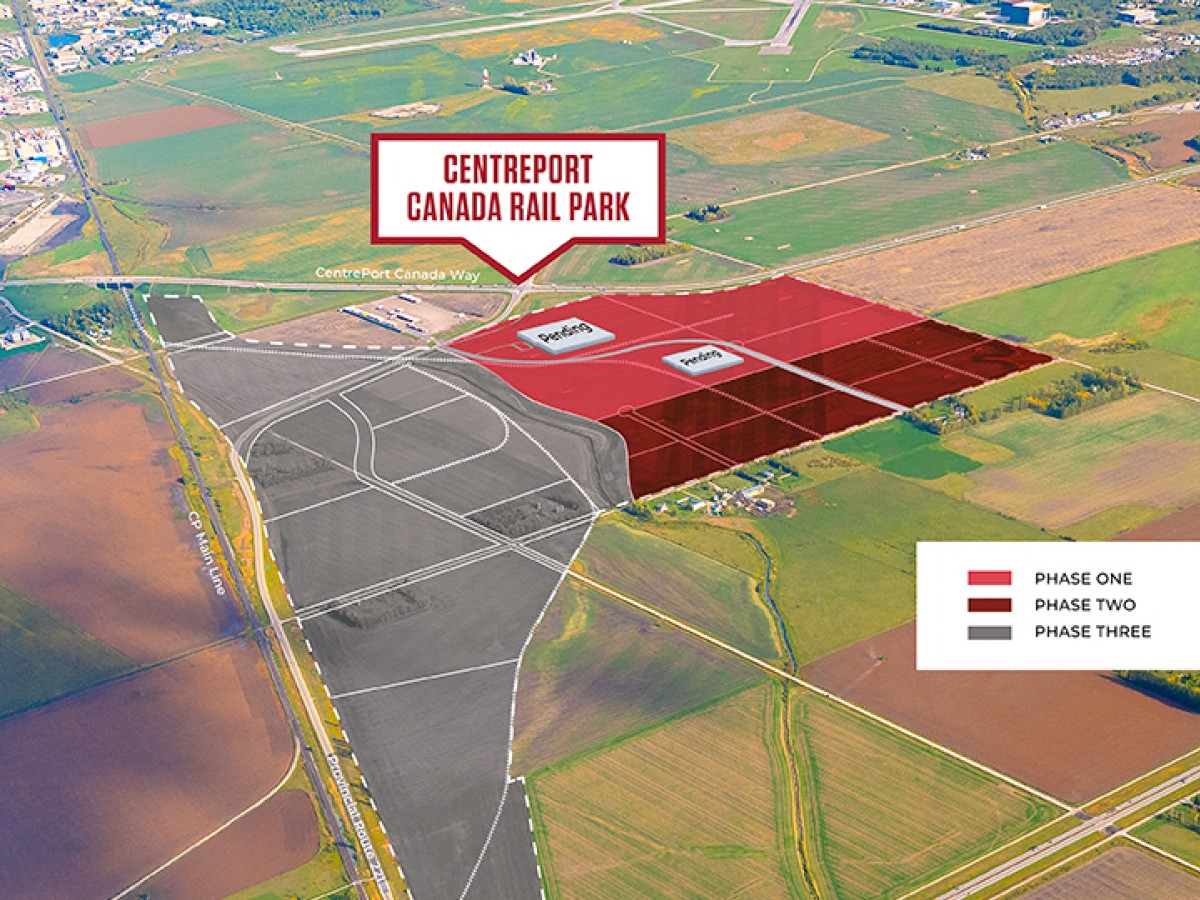 CentrePort Canada recently announced it will break ground in the summer of 2022 on a new 665-acre rail-served industrial space with real estate developer Focus Equities Inc. The rail park will be located in North America’s largest inland port and Foreign Trade Zone. For Winnipeg, it is one more reason for businesses to look to our city to expand and grow.

“As an integrated rail corridor connecting Canada through the U.S. to Mexico comes to fruition, significant opportunities exist for CentrePort to continue to grow and offer solutions to companies that manage part of their supply chain by rail,” says Diane Gray, President and CEO, CentrePort Canada.

For Economic Development Winnipeg, and its business development team, YES! Winnipeg, it’s another advantage to attract more companies to our city.

“We can tell global, national, and local companies with large shipping needs that Winnipeg offers more ways to move their goods or products from the heart of Canada and the centre of the North American continent. With prime access to rail and highways, it’s also a short distance to our international airport, offering more than 4,000 cargo flights per year, and open 365 days 24-hours/day,” says Ryan Kuffner, Vice President of Sales & Business Development, Economic Development Winnipeg & YES! Winnipeg.

Not only will the rail park be close to an interstate at the Canada-U.S. border as well as close proximity to the TransCanada Highway, but it’s also served by three Class 1 Rail Carriers connecting Canada, the U.S. and Mexico.

“With global supply-chain issues affecting the industry, there has never been greater demand in North America for a centralized logistics and shipping location for rail, truck and air than now,” said Ken Mariash, owner of Focus Equities Inc.

Canadian Pacific Railway’s recently acquired Kansas City Southern and if approved by the U.S. regulator, it will be the first single-line railway in North America to stretch across Canada, the U.S., and Mexico.

“All inland ports have rail at the heart of their developments and the CentrePort Canada Rail Park is the linchpin in realizing the vision for a true trimodal inland port – and North America’s largest – right here in Manitoba,” says Diane Gray, President and CEO, CentrePort Canada.

The rail park is expected to create more than 4,800 direct and indirect jobs with an economic impact that exceeds $3 billion dollars.

Possible tenants include logistics companies that handle the packaging and movement of goods, agriculture and other food supply chain providers, heavy raw material processors, bus and machinery manufacturers, and mining and mining-related companies.

“This rail park solidifies the tri-modal dream. We already have the advantageous central location, competitive costs of doing business, a growing and diverse workforce, with great access to the U.S. and Mexico. This rail park strengthens Winnipeg's position as a premier transportation and logistics hub in North America. It offers strong connectivity that companies around the world will appreciate. It gives them the space they need to grow and expand, saving them time and money,” adds Alberto Velasco-Acosta, Director of Foreign Direct Investment, Economic Development Winnipeg & YES! Winnipeg.

Since November 2021, more than $40 million in development permits have been issued at CentrePort. Read more from Diane Gray, President & CEO, CentrePort Canada.

The development of the rail park in the R.M. of Rosser also strengthens the need to service other areas of CentrePort. Late in 2021, the City of Winnipeg committed to begin servicing the southern part of CentrePort, which falls under the city jurisdiction. EDW is working with the provincial and federal governments to match funds in order to support and fast-track that initiative.

“We know there are companies like Bison Transport in Winnipeg that are ready to grow and need that parcel of land serviced before it can do that. Once CentrePort South is serviced, it doesn’t just help companies grow, it paves the way for other types of growth, such as a residential neighbourhood. There hasn’t been a new neighbourhood in that area for decades and along with it, retail growth will follow,” adds Kuffner.

To understand or find out more about all the advantages of Winnipeg for your business, go here.