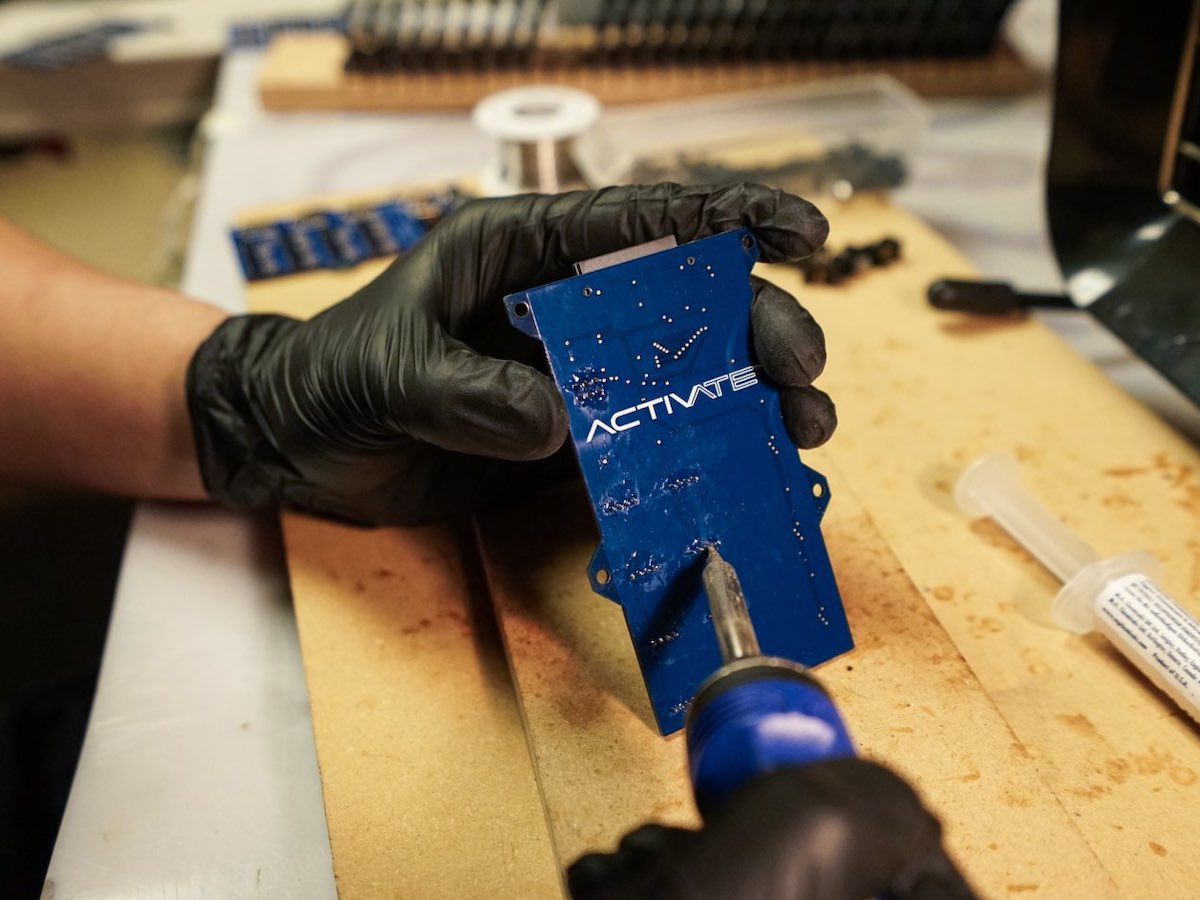 A small team of engineers and builders are working on Activate's latest games. The company is in the midst of a North America expansion.

In a non-descript building deep in the heart of a Winnipeg industrial park, a small team of engineers and builders is creating one of North America’s most unique and immersive game experiences.

Activate, which debuted in Winnipeg in January 2019 and has since become a top-tourist stop in our prairie city, is often described as a real life version of a vintage video game, in which participants are the avatar trying to complete multiple levels and ultimately beat the games, all while working up quite a sweat. Check out Tourism Winnipeg’s guide to gaming at Activate here.

In the year since Activate opened, it’s become such a success story that the owners, Adam and Megan Schmidt, are now on the cusp a North America-wide expansion. And every single component from the circuit boards, to buttons, to the lite-up floor tiles, is being produced by the Activate team in a small warehouse across town from the entertainment centre.

Multiple Activates are being created right now in the production facility, two of which will be shipped to Toronto in the coming weeks and set up in locations that have already been leased there. At the same time, the owners have partnered with the largest escape room company in North America to roll out Activates across the U.S.. A location in Louisville, Kentucky has already been open since December.

The owners have made a conscious decision, though, to keep production of all the games in Winnipeg.

“Because we are still developing things, we want to have pretty close control over the quality of what we're putting out there,” says Jeremy Darvill, manufacturing operations manager for Activate. “Right now, we just want to spend the year making sure that every single one is perfect.”

Most of the existing games are the brainchild of Adam Schmidt, who conceptualizes them, then takes the idea to one of the programmers on staff who figures out how to bring it to life.

“I draw on a piece of paper what I want a game to do. So it is a template, with red and blue squares… so it’s not rocket science,” Schmidt says.

The company has just recently hired a full-time game designer whose job it will be to conceptualize an idea and ensure enough games, and levels within those games, can be accomplished in one room.

Once a game is designed and programmed, the manufacturing crew gets to work.

The workshop that Darvill manages is filled with the sounds of drills and saws, as floor-board frames are built from scratch – the literal foundation for fan-favourite games like Grid and Super Grid. In another room, 10 3D printers quickly and meticulously create key components of the games and allow the team to prototype parts on a small scale to ensure they work perfectly.

“It really opens up a lot of possibilities being able to 3D print things,” Schmidt adds.

In a closet-sized room, shelves on both sides are filled with proprietary circuit boards, each one emblazoned with the Activate logo. One by one, they are created by the team. Each room at Activate operates on one of these boards and depending on the type of game, builders are easily able to add components in a plug-and-play-type fashion, which means a new circuit board doesn’t have to be created for every game in a room.

“We've got four Activates worth of circuit boards in this room and it's probably going to take us until mid-February to get one or two full builds done,” says Darvill. “So if we want to move at any type of pace, we're going to have to really scale up.”

The current warehouse has room for about six full Activate builds before they‘ll need to look for a bigger space, which Darvill expects will happen by the end of the year.

Activate’s success at home in Winnipeg doesn’t guarantee it will be a hit elsewhere in North America, but Schmidt says he’s confident the unique experience will find fans in other cities, though he’s not one to make bold predictions about the future.

“I think of us as a success story in that we’ve created two businesses that people have fun at,” he says, referring to Activate and his other venture, The Real Escape. "As far as going forward, we’ll see how it all plays out. And no matter what happens it’s still a Winnipeg thing made by Winnipeggers.”