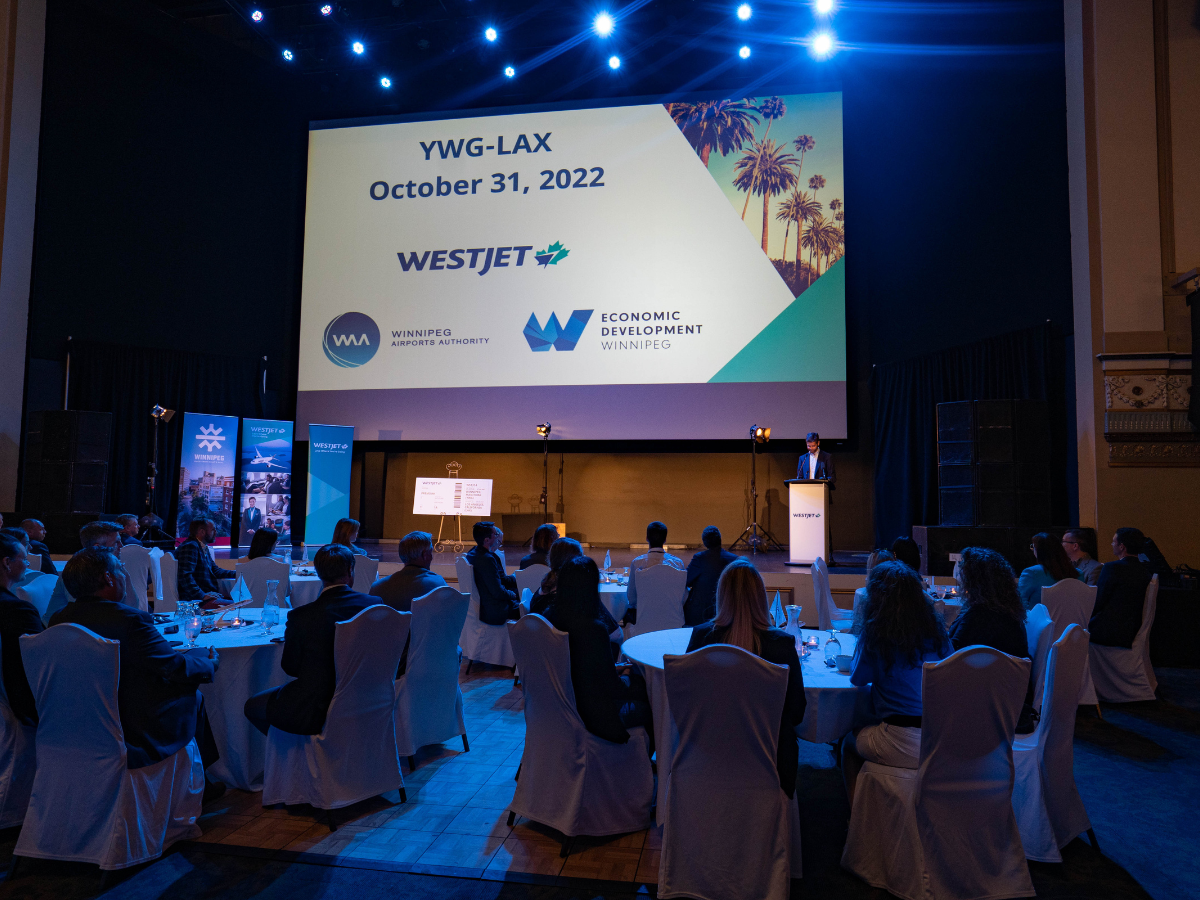 WestJet's LAX-YWG announcement at The Met | Photo by: Abby Matheson

What WestJet’s new direct flight from LAX to YWG will mean for businesses, industries and tourism

Winnipeg is going to Hollywood! Well, actually it’s Los Angeles, but WestJet’s new direct route from Winnipeg has the potential to open up blockbuster opportunities for Winnipeg.

“The LA market offers Winnipeg so many opportunities for investment, tourism and talent attraction. We can sell our city more effectively when we make it easy for people and decision makers to get here and experience Winnipeg in person,” said Dayna Spiring, President & CEO of Economic Development Winnipeg.

Direct connection to the City of Angels

Winnipeg is one of the first destinations WestJet served 26 years ago. The LAX-YWG flight is the airline company’s 22nd nonstop destination, which spans Canada, U.S., Mexico and the Caribbean. WestJet is the first to provide the LA service for Manitobans.

The route will initially run three times a week starting October 31, 2022, on Mondays, Fridays and Saturdays. WestJet is increasing capacity for Winnipeg by the end of the year by 80 per cent relative to what it flew last year, which is the largest year-over-year growth of any major airport in its network.

“Air service is an economic development catalyst. And this new route connects Winnipeg with a metro area of nearly 20 million residents. The service will reduce travel time between the cities by almost 50 per cent for every business, including those in the film and television industry which already brings more than a million dollars a day in production to the province of Manitoba,” said John Weatherill, WestJet’s Executive Vice President at The Metropolitan Entertainment Centre, where the new route was announced on August 17, 2022.

The route is an important one for Winnipeg Airports Authority. It is another step forward in Manitoba’s economic recovery and positions our province as an ideal place for business and leisure.

“Now our community is just one flight away from those bright lights of Hollywood. This direct route is something that we know that our thriving local film industry, in particular, has really been asking for and we’re ecstatic to play our part in helping bring it to them to help meet their growing needs,” said Nick Hays, Winnipeg Airports Authority’s President & CEO at the announcement. “As we all continue to emerge from the pandemic, this route will help open the door even further when it comes to our collective recovery.”

How will the LAX-YWG route boost Winnipeg’s economy?

The route is being financially supported by the Province of Manitoba, which sees connectivity as one of its top priorities for getting Manitoba's economy back and running at full speed.

“Our connectivity is the foundation of Manitoba’s long-term recovery—it is key to drive business investment and tourism,” said Premier Heather Stefanson at the announcement. "We celebrate WestJet’s investment in our province in our collective commitment to showcase Manitoba as a destination of choice. Manitoba’s booming film and television industry plays a very important role in our economy. Having this direct route from Winnipeg to LA will help Manitoba’s entertainment industry land new productions, recruit talent and attract investment.”

The film and television industry employs thousands of Manitobans, contributing $364.5 million dollars in 2021 despite the challenges of the pandemic. It’s all thanks to our diverse and world-class creative industries community, which is supported by one of the most competitive tax benefits in all of North America, which is helping to fuel the industry's growth.

Businesses in the creative industries sector will now have easy and direct access to the LA market for their products and services. But the possibilities don’t end there. Other sectors such as tech, manufacturing and life sciences stand to benefit from more people coming to work or invest here.

“The recently announced direct flight from Winnipeg to LA is an exciting addition to the offerings of the Winnipeg Richardson International Airport, which will open up opportunities for industrial development and business attraction,” said Diane Gray, President & CEO, CentrePort Canada Inc. “This route will enhance our region’s connectivity to a major economy, facilitate the movement of people in major industries, and increase the flow of goods and cargo.”

For Economic Development Winnipeg, it gives us access to the the largest economy in the U.S. and the fifth largest in the world. This new route means our YES! Winnipeg Foreign Direct Investment and Business Development teams can connect with companies in LA and across California to show them why Winnipeg is an obvious choice to invest or grow their business, while our YES! Winnipeg Talent team will have access to highly skilled talent for high-demand jobs in Winnipeg companies.

When it comes to tourism, we are excited about what this route will mean for our Tourism Winnipeg team that can now attract visitors from California and invite them to experience Winnipeg and maybe even winter, for the first time. Whether they are here for leisure or for events and conferences, we know we have a lot to offer—with phenomenal world-class attractions, cultural events and experiences.

“At Economic Development Winnipeg, we have worked very hard with our partners the Province of Manitoba and Winnipeg Airports Authority to put Winnipeg on the global stage. This new route puts us on the right path for increased growth and success,” said Spiring.

To learn more about WestJet’s new direct flight from Los Angeles to Winnipeg, listen to Dayna Spiring’s interview with CJOB’s The Jim Toth Show, below.